It’s half cheating as I buy the tofu dessert. 豆腐花 doufuhua, 豆花, dohua ? For some reason, in Japan that’s called “soy milk flower”, 豆乳花, and it’s said “torufa” from some Chinese dialect… heard by Japanese ears. It’s a funny name “torufa”, so I’ll say “tauloupha” in French.
The awful truth is I don’t know how to make it. (I’ll learn someday) So I buy bags of torufa, refresh and serve it.

The black syrup is black sugar syrup (kuro mitsu), I could make it… but as it comes with the torufa.
I did add the kuko (goji berries) with my fair hands. I hadn’t eaten my daily dose and I was starting to fill I had a wrinkle. It’s repaired. Goji berries prevent aging, it’s written on the package, that must be true.
No, it’s not becoming a convenience store catalog blog, not yet. I did something… not complicated, but so refreshing :

I used a slave… the ice-cream churning machine. You can do it with a good fresh mango, but I had none and you know I went to the kombini for the torufa, and I took a bag of frozen mangoes. I let it *defrost* in the fridge.
Then, cut in cubes of 1/2 cm a small organic lemon. Grate some of the peel. With scissors, cut very fine circles from a dried chili pepper. Roughly crash the bits of mango.
Stir into the bowl : the mango, its juice, the bits of lemon, the zest, the chili and 2 tbs of Chinese apricot liquor…
The acidity of the lemon, and the hotness of the chili have the magical effect of reviving the sweetness and flavors of a mango that tasted very blend. The mango was not completely pasted, so small bits of fruits can be find inside the sherbet. I like it.

Serve immediately with a little kuromitsu, black sugar syrup.
Or : take photos and eat it all melted. Well, I really took paparazzi shoots.
I don’t think it’s a good idea to prepare fruit sherbets in advance and keep them in the freezer. They taste much better just after being churned. Also, if you let bits of fruit, when you fruit, they become hard like ice-cubes. 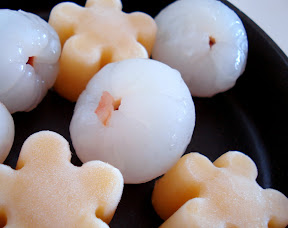 Another mango sherbet, without ice-cream maker.