The prince’s potatoes, in their blue period. Surely you’ve heard of the gratin dauphinois : 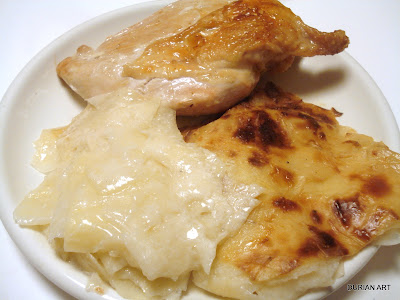 These creamy baked potatoes. Why dauphinois ? Well dauphin means dolphin, the animal in French. And that also meant the crown prince, heir of France. Before becoming a king, he was the lord of region, which was called Dauphiné. Grenoble was the main city of this land. So that’s simply a recipe of potatoes from Grenoble.

I did it very classic, except for the color of potatoes.

The main ingredient is time. You bake the potatoes hours, first in milk, then with cream. That’s all, no cheese or whatever.

The color changes as the potatoes release their starch. Then they absorb the liquid and become very soft.