Let’s be reasonable during 5 minutes. Here is today’s green juice. It feels FREEEEESSSHHH ! I’ve had it for 3 days in a row, so I have to introduce you to my green idyll…

Cucumbers are very juice. The outer leaves of a romaine salad are very green. And dill is sweet !

The dry grounds. I don’t like throwing them away, so you will them in a recipe soon.

Ying and yang. The 2 extremes together : a tarte flambée and a veggie juice. Both are made quickly for a weekday lunch. 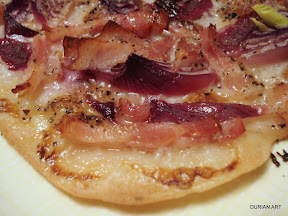 The juice : lots of fresh komatsuna leaves and a little yuzu juice.
小松菜 komatsuna, litterally means “little pine tree greens”, but they are sorts of turnip leaves. The juice is slightly bitter but not too much to drink it.

Serve the 2 together and enjoy sin with health.

Vitamins to fight the horrible weather, it’s fog, pollen, yellow sand, PM 2.5, whatever… With the pea soup outside, I don’t want the same on my table.
(Postscriptum, that was yesterday, 10th, today the sky is blue, the air maybe cleaner, but saddest anniversary of the year. 2 years ago… Vitamins are needed.)

Let’s take a red Kintoki carrot. I’ve added a little lemon juice. I got a thick paste in the blender, but after I filtered it into a smooth juice :

And some greens…うまい菜 Umaina. It’s a kind of Japanese beet leaves/Swiss chard. I took only the green parts and some grapefruit juice.

I’m a beotian foodie… So kale is simply chou frisé in French, totally ordinary curly cabbage. When I think I was envying the bloggers that had kale. I badly wanted to try fresh kale. We only see it in aojiru (herb juice). And I complained recently that my kale aojiru tasted of cabbage. Why wouldn’t it ? I should have looked for the French name. I did. Stupor : I have eaten kale, well refused to eat some, all my childhood. That was commonplace in potée (veggie stew).

Miso soup with carrots and :

Oboro kombu. It’s made of kombu seaweed and vinegar.

Put it into the soup…
(This image was rejected by moderation of the photo host… I guess the moderator is a robot or a martian. Who else would see a problem here ? )

You wondered ? That’s delicious. Really, that’s the stinky boiled kale that I had issues with. This ways, that’s a great fresh tasting cabbage.