Musubi mean making a knot. They are also packages of rice, to take with you as lunch pack. The plastic film gives the shape to the ball.

Wrap. Keep a few hours, or better the next day. The leaves are not very tasty but give a sakura flavors and saltiness to the rice.

There exist mabo tofu and mabo aubergine, two sister Chinese dishes widely adopted in Japan. Today they are on the the same meal.

My lunch tray. Yes, that was delicious and filling.

The base is the same : onion, garlic, ginger, Sichuan pepper and azuki beans. After simmering, I add miso, paprika and I pass the mixer. I’ve added slices of green hot chili.

Aubergines steamed, then stir-fried with garlic. I’ve added the sauce and more paprika, water and reheated. On the finished, a tbs of fragrant sesame oil and a few roasted sesame seeds.

To the rest of the sauce, I’ve added green sweet chilis, a little more Sichuan pepper, then cubed silky tofu.

Sakura, a cherry blossom cheese. It’s a delight.
A special offer at the local shop. It’s as costly as imported cheese, as it has no relation with the mass produced standard “Japanese cheese”.

The packaging is nice too. It’s a cow milk cheese, with the addition of a salt pickled cherry blossom and leaf.

It got a prize in Switzerland as you can see.
It is made in this farm in Hokkaido. They have cows from Switzerland. I see that they even make raclette. It’s tempting. Maybe you’ll see some here…

It’s a strong cheese, and yes, it clearly tastes of cherry blossom.

I bought the bread too. It’s a black rice bread. It’s a bit different from mine.

So now, we can have a nice tray of Japanese cheese and bread.

I’ve used brown rice and made it small size in a pie dish. That dish was too thin to go directly on my induction stove, it was starting to melt… so I have placed it on the cast iron plancha.

That’s how I made it. I used a dose of nero di sepia (bought) and the juice that got out of the seafood as broth.
That’s slow food… like 3 hours of cooking on low heat.

The rice is cooked. It didn’t take the color as much as polished rice would.

I added the topping put on high heat to get the bottom crust.

The seafood is nothing great, a frozen mix (shrimp, clams, calamari) so I’ve stir-fried in olive oil with paprika and turmeric till crispy.

Coconut power !
A light summer version of the doria gratin, with very sweet coconut and cinnamon flavors. The black rice is a sticky rice that naturally brings a sweet texture and flavor. It’s nearly a dessert. I could have eaten 2 or 3. 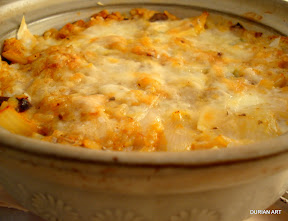 what is a doria ?

White and black like a panda. It’s a Chinese style “salad” plus rice.

Shiny details. The goya (bitter squash) is salted and rinsed. The other veggies cooked and “pickled” in rice vinegar : bell peppers and lotus root.

Usually, it’s only the vinegared renkon (lotus root). But I had black rice. So it’s like sushi.

The other dish will be in another post. Soon !

It’s a refreshing and colorful side dish.