The famous dessert from Bretagne, in its ancestral version. And it’s great. If you like the simplicity of salty butter caramel, you can only love it.
I followed… freely the familial recipe of Pagan (from his blog in French). Merci pour cette recette !

That’s not a dainty creation your Parisian artsy pâtissier. Not even presentable like the more pudding-like chilled version with prunes. It’s really a grandma-bakes-me-my-after-school-cake, something you devour hot from the oven. As it disappeared in a few minutes, I can’t say what it’s like when it cools. Well, it’s surely deflated.

Butter foam guzzling at the surface… Ah, if you could smell it !

Hokkaido’s butter has salt in it… but less than Bretagne’s. So I’ve added some.

It really tried to run out of the dish. Spectacular. I made it very flat because my oven is low and at first try, it went up so high that the top was scorched.

La Chandeleur, crepe day is February second, in France and some other countries in Europe. That’s a very old celebration that correspond to the Day of the Marmot in America and the Setsubun in Japan. The start of “Spring”, well, maybe Spring. At least, Sun is coming back in the skies after the darkest months. So crepes look like small suns..

The French tradition is each member of the family cooks his/her crepe in flat pan. And you have to hold some money in one hand and flip the crepe with the second hand. If you succeed, you will be rich during one year. If not…you get a crepe on the floor, on the head, or whatever, and you’ll have had a good time laughing about your clumsiness. 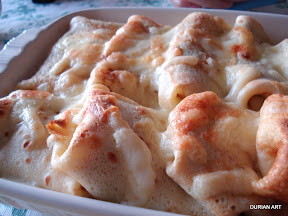 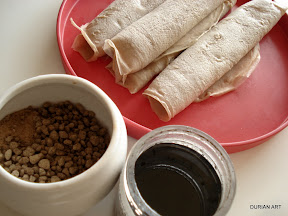 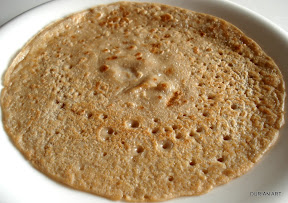 crêpes soufflees with coconut and kumquat

My version of the classic French delight from Bretagne (Brittany). You must eat a kouign before your death, and the later you’ll do it, the more regrets of not having started kouigning in your infancy….

From the same region :