I have finer and better noodles than average. They are more expensive because they are still made traditionally.

手延そうめん tenobe somen. Hand-pulled vermicelli noodles.
On the site of the brand 揖保乃糸Ibonoito (click here) you can see old prints of hand-making of these noddles. They have been introduced in Japan from China hundreds of years ago.

Here is a series of videos on how they are actually made now. Yes, there are 11 videos. Needless to say I’m not going to make mines so soon.

I have seen this in a shop. I made carrot juice to make the tsuyu (dipping sauce). I’ve simply added grate fresh young ginger and a little shoyu soy sauce to the juice.

Maybe it looked like that…
I am not an historian, just playing the costumed dessert game. And I have really love this retro version that I made not very sweet. It’s much lighter and fresher than the average baba.

The oldest pastry shop in Paris

In the year of grace 1725, Louis XV married Marie Leszczynska,
daughter of King Stanislas of Poland.His pastry chef Stohrer follows her in Versailles.
…
Five years later, in 1730, NICOLAS STOHRER opened his bakery
at 51 rue Montorgueil in the second arrondissement of Paris.
…
In its kitchen, where desserts were invented for the Great Court,king’s delights are still prepared.

Thanks to a dry Polish brioche, the King Stanislas had brought back from a trip, Nicolas STOHRER invented the BABA.

He enhanced the dry brioche by basting Malaga wine, flavored by saffron

The amber syrup : white wine, brown sugar, orange peel and saffron. A little Brandy to punch it up.

Did they serve crème anglaise (vanilla custard) as a side ? That was very popular. And the orange, if they could afford the precious exotic fruit.

Japanese tempura would be related to Christian Lent. That sound weird but it seems the dish appeared when the Portuguese Jesuits visited the reclusive Japan of 16th century and brought many new things. The habit of frying food in batter is one of them. Particularly, the missionaries would do donuts for the Carnival preceding tempora (Lent in kitchen Latin), so the Japanese associated fried food and the word tempora, tempura~whatever and it became tempura. Maybe.

Fried into tempura.
It’s totally plant-based as it’s a simple eggless tempura batter. The batter is flour, ice cold water and tempura baking powder that I bought. It is like ordinary BP with turmeric added for the color. 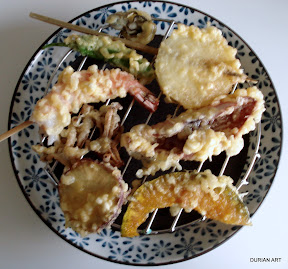 The freshly made tempura are excellent dipped in tsuyu (dashi broth, soy sauce and a little mirin, reheated together). I add chili pepper to mine.

It’s tsubomina (click here to read about this veggie).

The leaves of broccoli are excellent, don’t throw them away. That’s what you’d lose :

All herbs can be fried in small bunches. Dill.

Really ? Well NOT AT ALL. The Chrissy berries are a Japanese invention, because they have the same color as Santa, and they need to grow something in the greenhouses while it’s still sunny. Even when it freezes, it’s sunny here.

Eggnog for Christmas, I have never heard in Japan. The cold drink/cocktail is available year round in vending machines of all streets. It’s more popular in Summer. That’s called mirukuseeki. The jingles a bell ? No, try again milku seeki ? milk sheeki ? Yes, milk shake, with the local accent.

In France, that’s not related to the season celebrations either. I knew the lait de poule (hen milk). It’s the official name of eggnog. That’s a hot drink dating from… oh, even older. In 13th Century, French king Santa Clau.. oops, NO. Not Claus, Louis. The tyrant is never a gift. Saint Louis was enjoying it and he was a saint because he was reputed to have the willpower to refuse the treat during religious fasting periods.
I have always known the lait de poule as the egg grog. For us a grog is a remedy for cold. A sweet nutritive hot drink with some liquor, to pass through your sore throat before going to bed. It kills the cold during your tipsy sleep. Some people drink it in prevention, anytime. As you are always threatened by the cold.

So I read all around about the American tradition of the liquid ice-cream… Cute ! But can’t they re-heat some for me ? That makes me want HOT lait de poule. So I planned to buy a can and reheated… No, too complicated as you can’t put the can in the micro-wave. And well, you have to be born American to find it interesting to buy your eggnog to drink at home.

Bring a cup of milk to to boil. In the mug, an egg yolk, a schlouk of booze (dark Rum), sugar (a little sugar, lots of lakanto sweetener). Whisk. Add 1/3 boiling milk. Whisk. 1/3 Whisk. The rest of milk. Splash around. No, don’t whisk, you have enough foam :

Serve VERY HOT with powder topping of your choice (cinnamon, nutmeg, cocoa, sugar, even more booze if you are a vintage kid…).

Go to bed. When you wake up, you are cured.

if you’re crazy dip fruits in it.