Tonight, a good pichade. Lazy because I was too lazy to walk to the shop and get yeast for the dough. And I used a machine…

In the home-bakery (the jam program).

On dough with 1/2 whole wheat flour, it is made with baking powder.

Baked. It’s different with yeast, but this version is nice too.

The rainy season we have now in Japan (mid-June ~ mid-July in Kansai) is married with the plums. It’s called the “plum rains”. So these ume are the “rain plums”.
You make think they are not ripe on this photo. It’s true they are very sour and hard. But that’s at this stage of maturation that they are picked and used to make umeboshi (pickled plum).

When they reach this color they are too mature for the salted pickle. When they become soft…they are not sweet, still as sour and less fragrant. Well, mines are yellow and still hard.

I’ve just put the whole plums, blocks of sugar and water in the home-bakery. Lazy… but I was punished : that splashed and then cleaning the machine was a hell !

The sweet bread of the season is topped with a cherry blossom ! 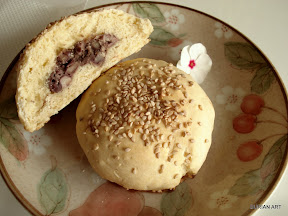 A sweet bread dough : 1 ts of yeast, 3 tbs of kurozato black sugar, 2 cups of AP flour, enough tonyu (home-made soy milk) to wet that. I’ve mixed it in the home-bakery machine.
Filled with sakura an paste and shaped.

Only one had a perfect aspect, but they were all delicious. I didn’t make enough. 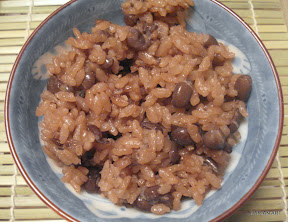 Today this is the real Canada Dr… well, the real sekihan-pan.

The other had not the flavor of the festive rice. This one has it 100%…

It’s really made of red azuki beans and of rice. I used “rice bread flour”, a mix of milled rice with gluten so I could make a classic yeast bread dough. The product is a bit expensive and I don’t think I’ll buy it again. I think regular rice flour and baking powder could make a good version too. Both dough could be steamed in a rice-cooker instead of baked in the oven. There are many possibilities.

I made the dough with the cooking broth of the azuki beans, then added boiled beans to it.

On top of that pink rice you often add gomashio. Normally, it’s crushed sesame with salt. I’ve let them whole.

Inside. You can see the beans in a quite moist pink bread.

Enjoy with green tea. Hot or cold, it really tastes like seki-han. That could be a great bread for a hanami picnic under the cherry blossoms if…
If I still have some left when the storm stops and the flowers open.
If the storm lets a few branches on the trees.
It’s apocalyptic today. Ffffffffffffff… the wind. Good point : the wind has cleared the air from pollen so we can breath better.