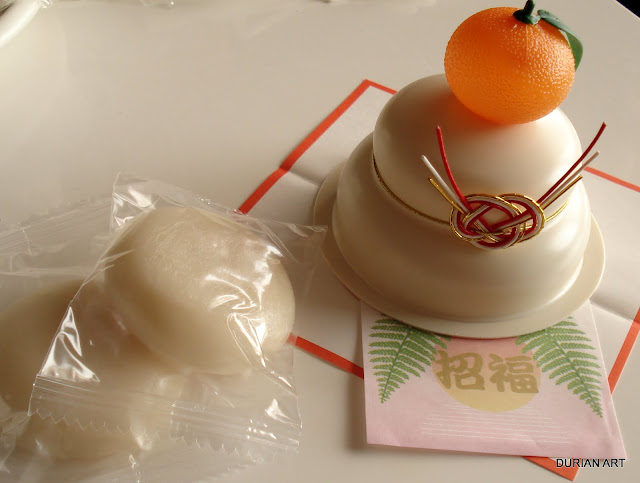 mochi 101
my display of kagami mochi

A soup is made with mochi. There are many very different regional or familial recipes, many lovely original ingredients… 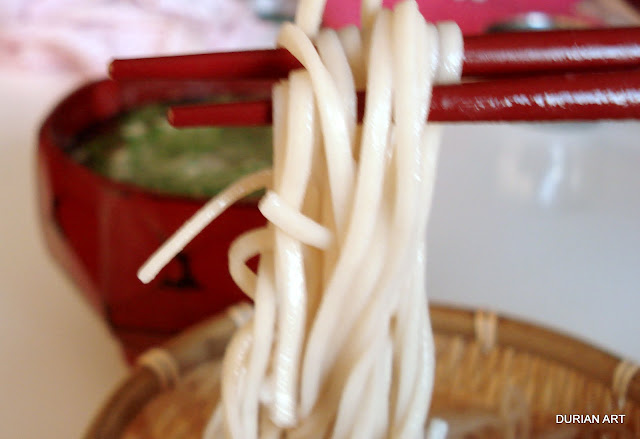 Soba
Noodles eaten to pass the year and symbolize continuity. 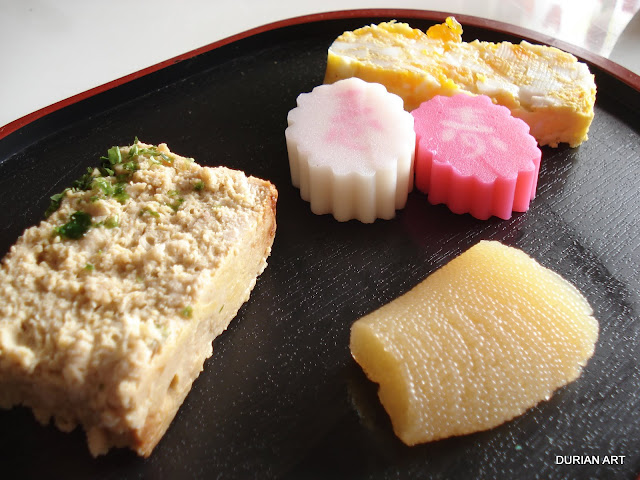 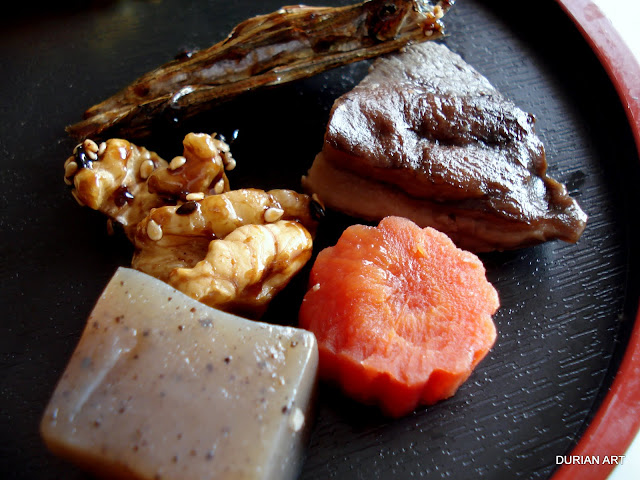 Osechi Ryori, New-Year good luck dishes are old style dishes whose names, colors or shapes are linked with good things. Most of it is prepared a few days in advance with many different ingredients and displayed in big lacquer boxes. 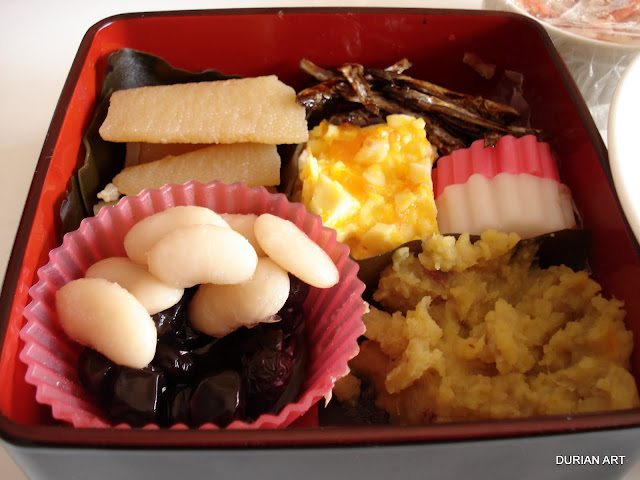 Here is an example of home-made full menu : 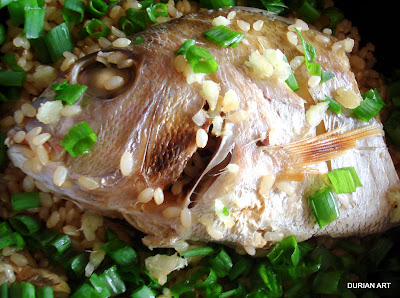 Tai-meshi, a meal with Osechi leftovers 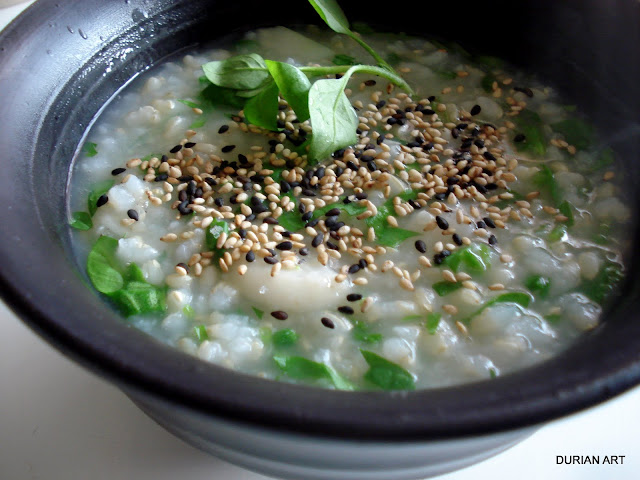 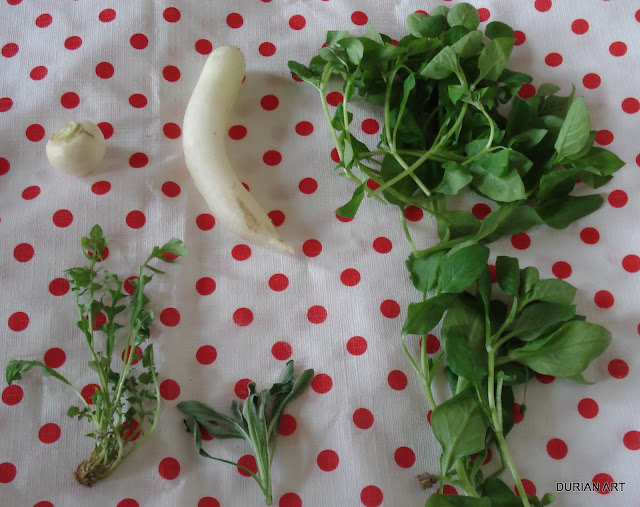 A tradition for January 7th 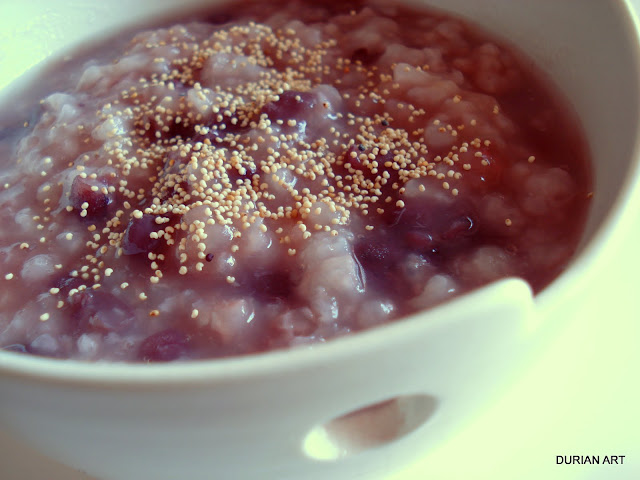 And to finish with the mochi :

We arrive at the last step of preparations for the Japanese New Year Osechi Ryouri.
You were thinking there were only small bits and no big piece. That’s true in a way. Japanese meal favor the variety. The more items the biggest luxury.
But there is something else. A roast… well a grilled fish.

Making a traditional meal of Japanese Osechi (New Year good luck food). That was an experiment and I had a lot of fun doing it. As usual, don’t look for perfection. I am no expert…

kazu no ko, means “babies in numbers…” , lots of babies, incredible fertility. A natural wish for the next year. Other eggs and fish roe/eggs are eaten as osechi, but this one is said to be the “most fertile” type of fish.

I used a wet kombu seaweed sheet to place them in the lacquer box….

Maybe you have already seen that on your sushi.

“Produce of Alaska” is written on the label. Japan has some, but not enough for everybody in this season, and I don’t think Americans would eat them anyway. They are eggs of Pacific herring.

kazu no ko, means “babies in numbers…” , lots of babies, incredible fertility. A natural wish for the next year. Other eggs and fish roe/eggs are eaten as osechi, but this one is said to be the “most fertile” type of fish.

Here they are raw and unprepared. They also sell them ready to eat.

It’s quite similar to the preparation of ikura (salmon roe/eggs) and other species.

Place the pockets of eggs in salted cold water. After about 20 minutes :

Post-scriptum : It seems the pockets we buy are salted for preservation. So a Japanese reader explained me I need a longer unsalting time. I had to soak the fish in “slightly salted” water, and change the water a few times. The final result would have been less salty.

You can see the white skin. I scraped it away gently with a table knife -the kind that doesn’t cut. Then I rinsed them in fresh water.

My brine was made of 1 cup of sake, 1/4 cup of nama shoyu (soy sauce), and 2 cups of kombu dashi (seaweed broth). I brought it to a boil and poured on the fish.

Kombu dashi seaweed broth : I put a few leaves of dry kombu seaweed in water, brought to a boil and let a few hours.

I’ve let it 12 hours. Then I was disappointed, as that was too salty when I placed them in the box. But the next day, that was better and taste of sake less dominant, more refined. It is salty food anyway. Serve small amounts with less salty item on the side. With this recipe, they can be kept a few days in the fridge.

I used a wet kombu seaweed sheet to place them in the lacquer box.

On the guest plate with other osechi items (my brunch today) :

They are not only served at New Year, but they are less common in other times. They can be a sushi topping. Or separated eggs are mixed to seaweed salad, or to calamari sashimi.

Making a traditional meal of Japanese Osechi (New Year good luck food). That was an experiment and I had a lot of fun doing it. As usual, don’t look for perfection. I am no expert.

The menu is highly related with Shinto religion. And New Year is the major Shinto event of the year, maybe the only one everybody kind of celebrates in Japan. Everything is symbolic. Most things are displayed to call good luck and prosperity.

Doors are decorated with kadomatsu that contain pine, oranges…

And the main activity of January 1st is hatsumode, the first visit to the Shinto shrine. For most people, that’s the only visit in the year. Look at this shrine. I live nearby and I see people getting in maybe once a month… except today.

I’ll detail the symbolism of the food, and the recipes, in other posts. These preparations are ancient Japanese food. In old times, cooking and serving a hot meal was a lot of work for the housewife and the maids. So, in order to free everybody of work for the celebration, the Osechi Ryori is prepared in the week before the New-Year (from 25th to 31st roughly). Then, it is eaten cold the 3 first days.

Mochi topped with a kumquat.
That should be a mikan orange, or a daidai bitter orange, but I have the miniature mochi totem. Mochi are blocks of sticky rice paste.