I simply wrapped the nori (sheet of seaweed) around onigiri (rice balls) like the scarf of ninjas. That’s not really a recipe. I’ve just thrown a fresh Summer lunch with lots of refreshing produce.

Molokheya leaves stir-fried with miso. That gives a nice salty condiment, ideal for filling an onigiri.

Brown rice (genmai) + sticky rice (mochigome) and sesame. I filled the balls and wrapped in a sheet of nori seaweed.

A Summer kabocha pumpkin. I steamed a wedge. The mashed flesh is the base for the second salad :

Suika (water melon) is the dessert.

That’s my ideal. Good simple food. With a twist.
Here is a new version of mehari-zushi (sushi in pickled leaf). Again ? Well, those leaves can be stored years when you buy them -or when you make them properly. But mines have to be eaten within the week…

Hatsuga genmai (germinated brown rice) and ukon (turmeric). This yellow spice is a common addition to the pickle.

Wrapped in leaves of takana (mustard greens, pickled). So technically, they are not sushi without vinegar, but they become sour enough thanks to the leaves.

With sencha green tea. That’s all what you need.

My beloved mehari-zushi (pickled leaf sushi) are back…

With them, some thyme flavored veggies. I baked 2 small eggplants, then cut them. Added shishito green peppers. New onion. Olive oil. Salt. And fresh thyme. All that reheated together. Mmmm…

Nice green balls. I didn’t fill them with anything. I like simple food.

The most important ingredient of Japanese cuisine is rice. Japanese rice are of the japonica style, they are round and firm. Outside Japan, you can get some sushi rice, or Italian arborio that are of japanica cultivar too. Sticky rice is a different type, it’s called mochigome in Japanese. Rice has different names in Japanese. Kome, okome, the plant. Gohan, meshi when it’s cooked…

The bowl of unsalted, unflavored but perfectly cooked hot white rice is often present on the the table.
But, you have many variations.

onigiri
The rice “sandwich”. Shape hot rice in your hands.

Rice bowls : fill half of a big bowl with hot rice, add some toppings.

Flavored rice dishes. Ingredients are added in the rice-cooker. There are millions of possibilities. A few classics : 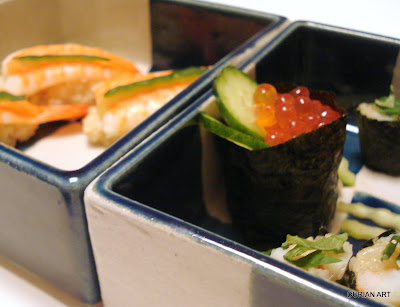 Bento
Fill a part of your lunch box with rice.

Yaki-onigiri of red rice, with gomashio (sesame and salt).

A Japanese classic with a twist or two.
Korokoro is the noise of balls or small wheels rolling…
Onigiri are balls of cooked rice, but they tend to be shaped in the hand (nigiri =grasped), so they are like triangles usually. These are perfectly round balls.

And they are grilled (yaki). That gives them a crispy crust all around, with a little pop corn flavor. While the reheated rice is very soft. Addictive !

First particularity : instead of plain white rice, I used a leftover of this sekihan (rice with red azuki beans). That’s not forbidden. Any rice leftover will do. If it’s plain you’d want to add some kind of stuffing or flavoring. That’s not necessary here.

Then I grilled them in the tako-yaki device. That’s a metal tray with half-sphere holes. There exist some electric machines, some big gas ones for shop, mine is a cheap and small cast iron one that I heat on my induction stove. This mold is not exclusive to Japan. It’s used in different Asian countries. And also in Denmark to make ebelskiver pancakes.

I oiled the holes of the hot mold, put rice. Then when they were done, I took out the grilled half balls, put more rice, and a little miso as glue to fix 2 halves together for the miso version (below). Those on top are plain.

Yes, yes, I want to eat the rabbit. But that’s not done in Japan.
Here is my second choice, a curried carrot soup and onigiri. They were onigiri at some stage… I need a quicker camera, that’s all.

“The carrots are cooked” they were repeating in French. You know why ? During all those years, we believed that was an ancestor of Jamie Oliver trying to teach some basics of French cuisine to his compatriots. We were wrong. They reveal it now : Why the carrots are cuites !

Maybe the next thing is they demonstrate I don’t get nutriments from my garden herbs… It’s good I can’t see the show. I don’t want to know. I’m joking about it, but that’s not the first time science contradicts the claims of the hip raw diet gurus.

Onigiri. That means shaped in the hand. It’s a ball of rice.
Well on a scale zero to ten, the onigiri are super solid to super breakable.
10 : onigiri of steamed mochigome (sticky-rice), shaped in the box. You can play tennis with them, they don’t break
7 : onigiri of white Japanese rice, freshly cooked in rice-cooker. It is the standard style.
5 : brown rice
4 : parboiled rice
3 : cold rice
2 : cold brown rice, like today’s
0 : raw rice, they don’t stay in shape even 1 second

These onigiri are filled with a mysterious leafy pickled… It’s a secret, I work for the NASA. I will tell you some day. It has flavors of sansho (Japanese Sichuan pepper). And with flakes of dry fish (kezuri bushi) usually used to make dashi fish stock. Plus salt.

Then reheated in a frying pan brushed with cooking oil and at the end I poured in a few drops of fragrant sesame oil (not for cook, that degrades its taste).
It’s also possible to grill them under the broiler. Or in a waffle-maker with an onigiri plate (I have that, I remembered later).