This the food for today in Japanese tradition : 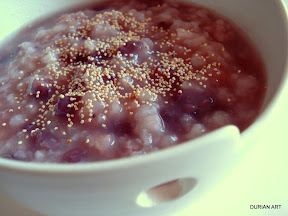 Hey, why not ? An okayu (rice porridge) makes a nice… brunch. It’s simple just fill the rice cooker the day before.

This version is not traditional. It’s genmai brown rice. Then I’ve added fish bone stock and a few red items as final toppings. All that together was really tasty.

Once upon a time in Japan, there was 正月 Shogatsu (new year) and 小正月 Koshogatsu (little new year)…

Once upon a time in Japan, there was 正月 Shogatsu (new year) and 小正月 Koshogatsu (little new year). If you click, you arrive on the Japanese wikipedia page, which is exact (as far as I know), but if you pass on English version, it is about something unrelated.

In those time, the Moon ruled the world. The little New Year was at full moon… now we say that would be January 15th. Some say 14th. Well now…

The little new year was also called 女正月 Onnashogatsu (woman new year) and dedicated to the house wife.
The custom was to azuki-gayu. It is okayu (rice porridge) with azuki red beans. The red color reminds the blood, and has been considered a symbol of feminity, of fertility, of healthy life, and what’s not in good blood ?

1 cup of cooked azuki and their broth