What is nice when you buy an ananas or pineapple is you have get both a dessert and green plants to decorate your living room.

The blanc-manger is on of the oldest dishes that exist. It was already popular in Middle-Age and was present as an entremet (litt : “between dishes item”) in all big meals. Most people know the dessert version.

Back then, it was not a dessert, not necessarily sweet nor salty. Pomegranate was often a topping.

Osechi Ryori is Japanese good luck food for the NewYear 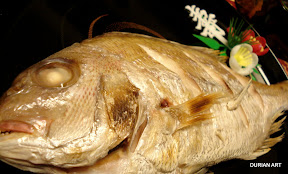 What is nice when you buy an ananas or pineapple is you have get both a dessert and green plants to decorate your living room.

Very simple. 1/2 a pinapple, peeled, cut in big chunks. Baked about 1/2 hour. Flambeed with a little rum. Then broiled with sliced almonds and decorated with pomegranate.

Heat hot from the oven… and forget Winter’s coldness.

This is one of the dozens of uncommon veggies that makes the refinement of Kyoto cuisine.
This petal shaped vegetable is called yurine (lily root) in Japanese. The taste and texture is closed to potato.

Mine was not pretty, I borrowed a photo of the raw whole yurine. I’ll get others soon.

The site says it is “cultivated all over the world”. Really ? I couldn’t find a Latin name, even less an English translation of the name. It existed in the wild only in Japan and Korea. It is now cultivated in Hokkaido mostly (4 tons per year), and 70% is eaten here in Kansai region.
The season is November to February roughly. So it’s often used to make New Year dishes.
It germinates and becomes purple in spots quickly in the daylight (mine did), so in shops, they do like my grand-ma with her carrots, they bury them in sawdust.

Preparation : Brush and wash the yurine. Separate the petals. They can be cooked in many ways like potatoes, boiled, stir-fried, steamed… but the cooking time is very short.

Here they are steamed, and sprinkled with broken pink pepper.

It’s a “tagine steam”.
It’s very convenient. I use the “steam program” of the oven. I started by thawing chicken breast, steam-cooking it. On top, added the yurine, steam-cooked 2 minutes.

No need for fat or whatever, the chicken skin released a little fat as you can see. Added hakusai (Japanese napa cabbage) for 2 more minutes and reheating the sauce (in a cup on the side).

The drink was persimmon tea, well dry leaves of persimmon I had dried (see there).
If you don’t make yours, Japanese (and probably Chinese, Korean…) shops sell 柿茶 (kakicha), 柿の葉茶(kakinohacha).

I broke the leaves, placed them in the basket, covered with boiling water that I discarded after 20 seconds. Then I added more very hot water and let it infuse 10 minutes. It’s has a lightly slightly nutty flavor. It is said to be rich in C vitamin. It’s caffeine free.