Well, I was thinking about finishing old bottles I’ve add since forever in a closet and I thought that was vodka in the dark corner there, so the plan was to do that famous creamy vodka sauce. But, that was tequila. So why not ? I had tokk, the Korean rice cake-pasta-mochi and coconut cream. At the end there is nothing left of the original recipe, but miraculously I got that luscious sauce effect… Finger-licking good !

That starts with flavors of three fresh herbs in a tomato sauce with onion, garlic and olive oil. Plus a cup of vo.. er, tequila.

Then pas… er, Korean tokk are added. Then, when they become soft coconut cream.

The tok’ in sauce.

A crown of steamed romanesco.

Gungjung tteokbokki (궁중 떡볶이) were the tokpokki prepared for the Korean royal courts. They were served long before hot chili reached Korean peninsula, so they are much less spicy than the street stall version.

This is a simple interpretation of the dish using soy sauce and sesame oil as main flavoring and what I had in my pantry.

The tokk (rice cakes) need 8 to 10 minutes boiling, then refreshing under fresh water. Then stir-frying and wetting the sauce with the mushroom soaking water. I only added black pepper.

Decorated with a little yuzu peel.
The balance of flavors is perfect. I think the mushrooms bring a lot, so don’t skip them or replace them with something strong in flavor. Beef is a possibility.

Kimchi from this pot (read here) :

Matcha and wagashi. Tea and cakes. That’s an informal tea ceremony with a Korean twist.
The model is mitarashi dango, skewers of mochi balls in a sweet sauce. But these are sticks…

I’ve used Korean mochi (tokk). I have no idea if that exists elsewhere than in Osaka, but you can see this version here. It’s very convenient to prepare.

Boiled them till soft (10 minutes).

Put on skewers. Passed a little sesame oil around.

I’ve made a sauce by melting a small block of kurozato black sugar in water, adding a little soy sauce, a pinch of hot chili and a little potato starch to thicken.

Reheated the sauce and painted the skewers with it.

Today, I’ve made tteokbokki that I call tokkpokki because that’s how I hear it and remember when I have no spell-checker. Yes, that’s hot !

Here are the ingredients :
-the ttoek are Korean mochi or blocks of rice paste. For this dish the cylinder shape is common.
-veggies (carrot, onion, garlic)
-sauce
-a protein, here tofu (that could be strings of meat, slices of fishcake or boiled egg)

The spicy Korean miso, gochujang. I’ve added paprika powder for more redness, and 2 dried hot chilis for spiciness. That way you can choose the level of hotness you wish.

Koyadofu is freeze-dried tofu. The hard blocks can be re-hydrated in water in a few minutes.

They become like sponges. I had one big block that I cut in slices.

I add the different ingredients, the sauce, water, then the ttoek and let simmer half an hour. Salt, sugar, hot chili can be added to taste.

Sanchu, Korean salad. That’s not what Koreans do but I like it as a side here.

A glass of makkoli rice drink.

The meal was complete with kimchi, and green jeon pancakes. 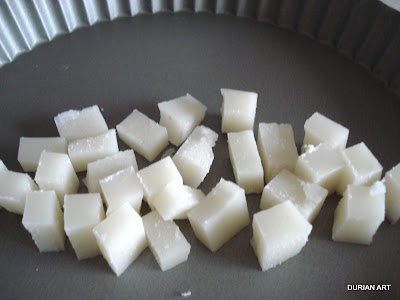 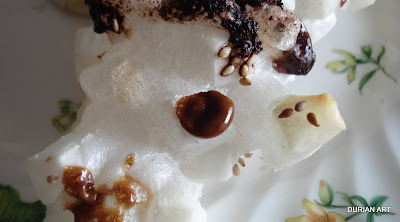 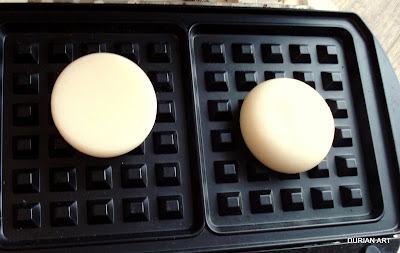 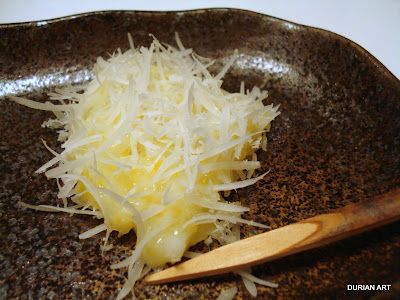