Local seafood and exotic recipe. Daube de poulpes.
That beast is ugly, sorry. And the daube…it’s a stew that never looks refined.

Small tako (octopus, poulpes) from the area of Kobe. That’s something you cook extremely briefly or really longly. Today, the slow way…

It melts in the mouth.

Tofailles, tofaie, tofaye… whatever the name is the solid treat from the Lorraine Vosges mountain area. Ideal for cold or chilly days, so it was served year round in farms. They all made their own bacon surely.

It’s potatoes. Bacon. Onion. White wine. Some add this or that… And the main ingredient is time. Forget it hours on the wood (or induction) stove :

It’s so soft and nicely caramelized under.

A camelia bud, still Winter but blossom season is arriving…

Reblog from the “tofu page” 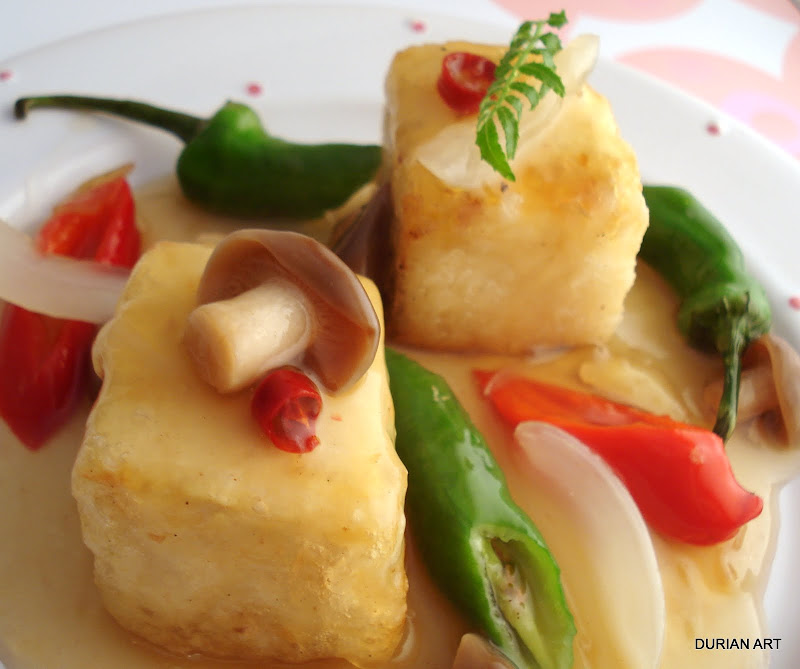 You have Japanese tofu that is :
kinu-dofu, silky tofu
momen-dofu, cotton tofu (translated as *firm tofu* in English)
Both are soft and watery. The first is very soft like egg pudding, the second is soft like starch pudding.
Really firm and dry tofu, the one that has a texture closer to meat is popular in China. It’s uncommon in Japan, except ….

The beach is under the flooring !
Nasubi kare is a popular Japanese curry with nasu AKA nasubi (aubergine, eggplant) and beef.

Plated version, with the *rice*.

This is the second round for this month Daring Cook’s Challenge. See the first recipe here.
The game was to use at least one item from each list :

Do you have an idea about the mysterious ingredient from the third list ? What would you try ?
Answer at the end of the post.

It’s slow-cooker art… I made the beef curry from scratch, it’s so much better than using “roux” and just throw in aubergines and meat.
Japanese curry mix, whole sweet spices, the hot chipotle powder, coconut butter, onions, veggie. Then, hours later, the aubergines, more garam masala to balance the taste.

Tadada !!! That was a delicious sweet curry.

Riced cauliflower is raw cauliflower cut like rice. You can’t make easier. I slightly steamed it after.

That makes you a tasty low-carb side for a dish with sauce.
So have you found the secret ingredient ? That’s really something I recommend as the effect is surprising. Before simmering, I added a banana in the sauce. It longly melted and caramelized. The banana taste become unidentifiable but you have a fruity feel. Try it someday.

Here is my fricot… That’s the typical out of fashion dish, a stew with roux. Quelle horreur ! Really, we girls, would stay away from it, when I was a teen then a student. How many million calories or bad fats and bad sugars per plate ? Daube , a name of Southern stew is even used as an insult for some art or other writing that would be fat, watery and dull. That was in France. And we had good reasons as we have seen abominable versions in : school meal stews, cheap eatery stews, prepared dish stews… Grand-ma’s home-made was totally different, but still very *rich*. That was good, too good. Something you could indulge on a Sunday dinner.

In Japan, that’s not alt-modish at all. That’s not hip, but that’s considered as sound modern home-made food. For some weird reason. I should buy some to take a photo, but I would have to throw the object after. As “home-made”, ahem. Well that looks like white chocolate, but that’s instant shichuu (stew) roux.
So what did I pick ? Japanese or French ?

Revised stew. The roux is made mostly of green beans, caramelised onions, white wine. After simmering with the meat, I took the chicken out, and I passed the mixer. More boiled onions and some mushrooms were added after.

There is no cream nor butter in the dish. The white topping is yogurt. And the taste is… tatata… GREAT ! All the flavors of the good ol’ fricassée, without the heaviness.

Kuzukiri are Japanese crystal noodles made with kuzu. Kudzu. Its root. That’s a sort of starch I sometimes use for desserts. They take the sauce well and are often added to dishes like sukiyaki, at the end, to profit of the rest of broth.
With a little ground coriander seed.