Another simple lunch that is not so usual. It is centered on those falafelish patties. I should call them ta’amiya as they are made of fresh broad beans. It’s green, full of proteins and delicious :

They are delight dipped in Chinese vinegar, like gyoza dumplings.

I cooked them well in olive oil and made the sides a bit crispy.

The sides are very simple. Sorghum, cooked in the rice cooker, seasoned with salt and aonori seaweed.

Black pepper seared veggies. I nearly scorched them and stopped one second before, on purpose.

They were very crispy and flavored with a smoky taste.

The full menu. You need to start 40 minutes before, but that takes 3 minutes. Fill the rice-cooker.

Mixed grill.
Kabocha squash. I only cut chunks (any shape is OK as you can see). Chicken breast, I passed olive oil all over.
Place all that in the oven toaster. Then turn after 15 minutes. After, for me, that just tastes great. I didn’t even add salt. Roasting is a magic flavor enhancer.

Mixed veggies, greens and salad.
Take from the fridge. Kimchi, shiso leaves. A little kimchi everyday brings vitamins, probiotics, fibers and color on the table. Well, I fall in that addiction every Winter.

Mixed rice.
Take from the rice-cooker. Brown rice mixed with sorghum (kaoliang, takakibi). On top, black sesame, powdered. The taste is not very different from rice but it’s more crunchy and the round shape is funny. 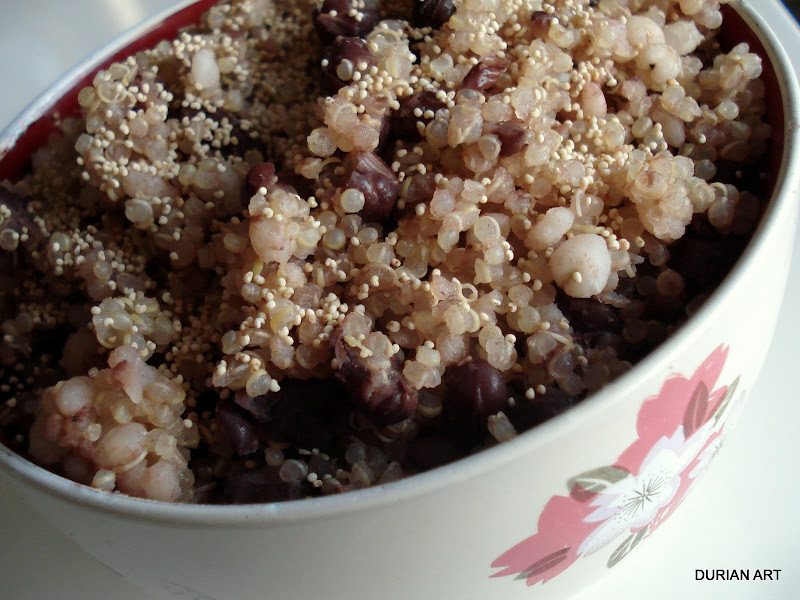 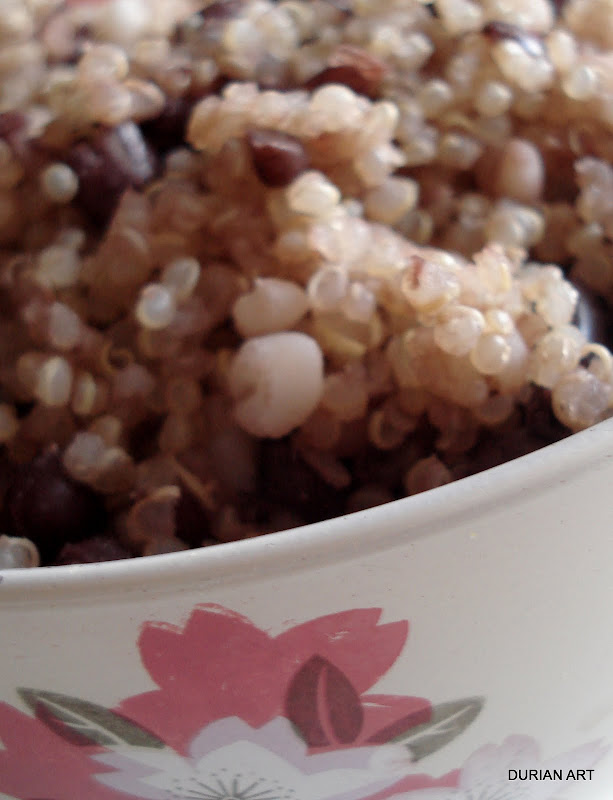 I’ve just put quinoa and sorghum instead of rice. 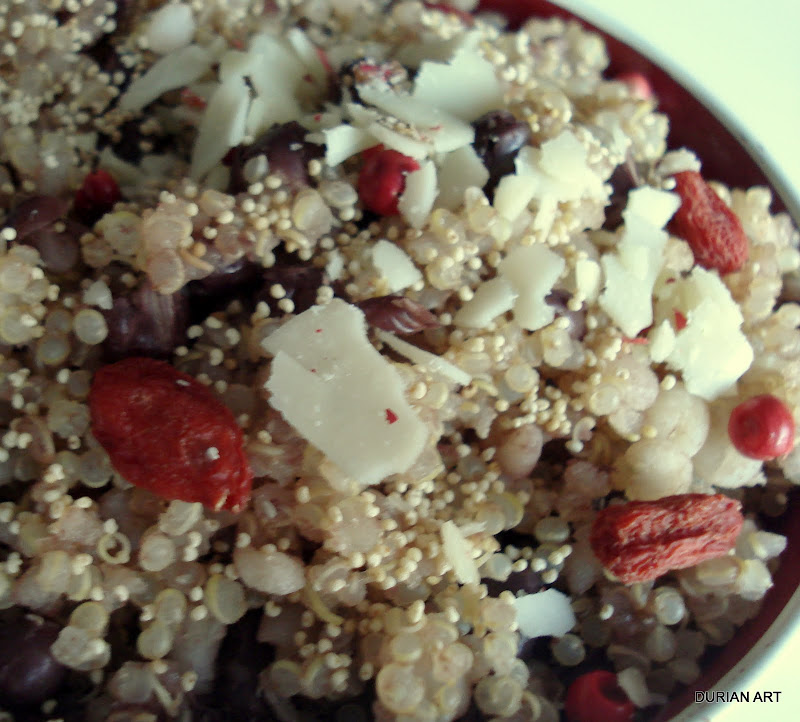 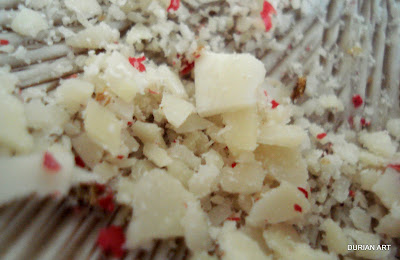 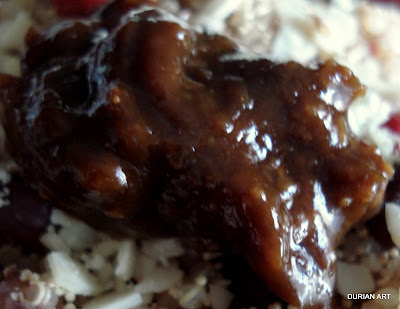 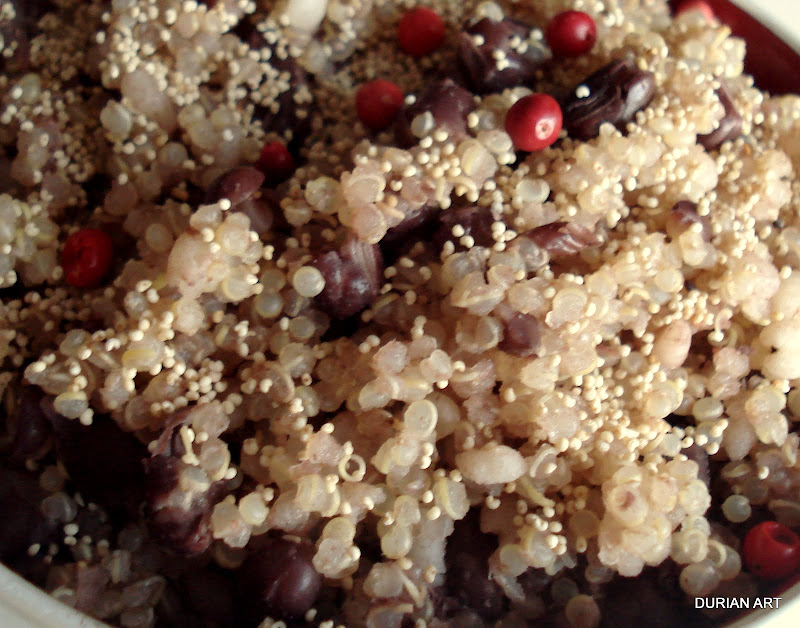 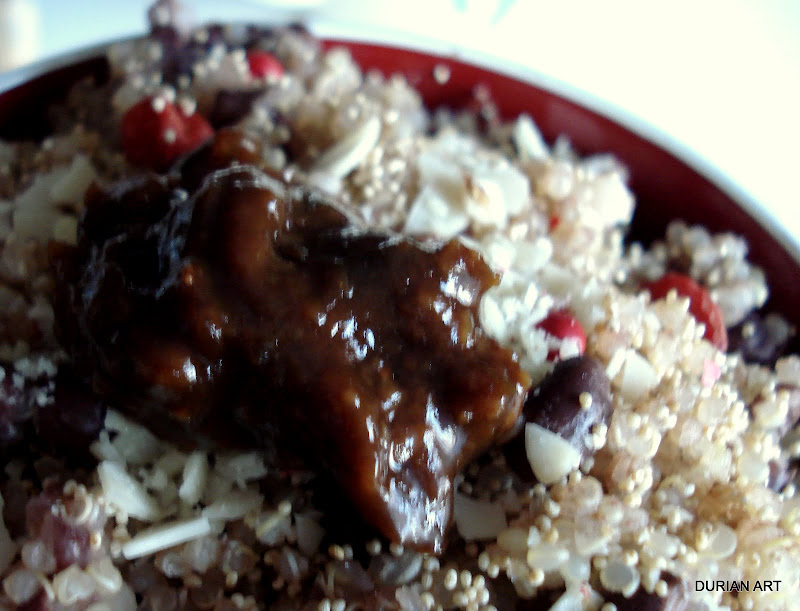 It’s an ingredient I sometimes use.

Well the bicolor sorghum has 2 names :
Japanese : Takakibi タカキビ（高黍）
Chinese : Kaoliang 高粱
That’s the same grain. I believed they were a different plant…
If you see the same Chinese characters, clean your glasses, the second is different…, yes, they probably used to be similar and were changed. Now both can be seen in Japanese books…

Here are the pictures :

The “white” is the kaoliang and the “red” the takakibi. Yes, both where totally red and the kaoliang is more polished, but look at shape and size… as different as Uncle Ben’s and Thai jasmine rice. So variation in sorghum is as wide as that in rice…

Taste ? A little different too, but that’s not food with huge flavor. I prefer the Japanese one.
There is a difference of price too. 20. Not 20 yen per kilogramme.
I paid about the same price for both, I had 50 g in the enveloppe of takakibi-sorghum, and 1 kg in the bag of kaoliang-sorghum. LOL.

I was lost with terms… for a second reason. Sorghum is also called “morokoshi” (sorghum) in Japanese, I mean in books, not where I shop. The maize corn was later named “to-morokoshi” (Tang sorghum… ). But that was much later than Tang era, that’s because ….. my Chinese teacher explained when I was not listening, oh no, I always listen, she explained in Chinese, so sorry, I need to take more Chinese lessons to tell you.
Oh, that’s not worse than the corn/corn confusion in English.

A little change from brown rice, this cereal is sorghum (Chinese kaoliang), with fragrant tofu, calamari kimchi, lettuce, a few litchis in the back…