空芯菜 kushinsai, water morning glory. It’s a South East Asia classic green. With the tropical weather we have now, they can grow it easily.

Kujo is the 9th Avenue, in Kyoto. They don’t grow them in the street now, but maybe 200 years ago. It’s one of the many Kyoto area original vegetables.

Second side : silky tofu, to eat with soy sauce and minced greens of kujo negi.

Another fresh meal to celebrate pre-Spring… I am not a big fan of the longly cooked rolled cabbage that become nearly white. These just caramelised in the pan and kept their superb green and crunchiness.

I’m not sure about germinating azuki beans. That’s after one week and it seems that one day longer and they would…er… rot ? So I boiled them. That looked not as usual. Finally, they taste good. Maybe I did something wrong.
I also had fresh Spring cabbage.

The mix : half-mashed boiled germinated azuki, miso, garlic, ginger, a little potato starch, black pepper and a cut bunch of dill.
It’s rolled inside the outer cabbage leaves that Irinsed, steamed 1 minute, rinsed so they became flexible.
I cooked them a few minutes both side in olive oil.

Another delicious and simple plant based lunch with hot spices.

I stir-fried this mirepoix with ajowan and mustard seeds.

Then on top some salt, chili powder and garam masala spice mix.

Steamed only one minute.

Tartine au misozuke tofu et au daikon kaiware (radish sprouts).
A tartine is just a slice of bread with something on it. Simple.

Graham flour and sesame bread. It’s a thick bread, a bit rustic. Perfect for that “cheese” tofu. The radish touch is interesting and crunchy. Miam !

The bread is pistolet milk roll that were starting to become stale. (Post about pistolets )

They were still very fluffy inside, and great after toasting. Perfect hot sand, fresh and creamy.

A “burger”, that the Japanese call hamburg’ or hanbaagu to differenciate them from the meat patties from the infamous fast-food chain.
It’s vegan and it’s “recycling” stuff. Yes, okara is a by-product of making tofu and it would only be discarded usually. That’s too bad as it’s full of healthy fibers, and I find it delicious.

The Daring Cooks’ February 2012 challenge was hosted by Audax & Lis and they chose to present Patties for their ease of construction, ingredients and deliciousness! We were given several recipes, and learned the different types of binders and cooking methods to produce our own tasty patties!

I used 3 ingredients very common in Japan that may look a bit mysterious for European, American, African and South Pole readers of this blog. So look : 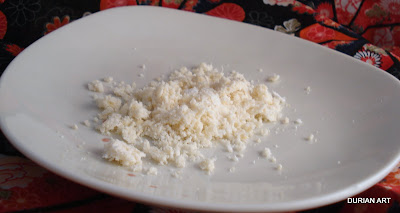 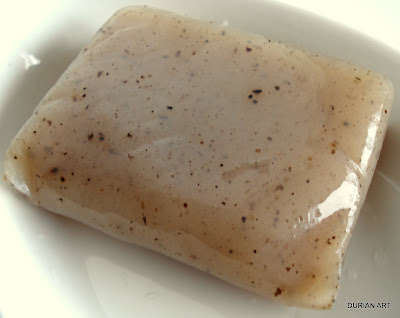 It’s a root veggie that we buy cooked into blocks of different shaped, blocks or noodles. It has a firm jelly texture but it takes mostly the taste of the sauce. The good points : it’s nearly zero calorie per serving and it favors digestion. That’s really interesting here as it gives textures to very soft patties. 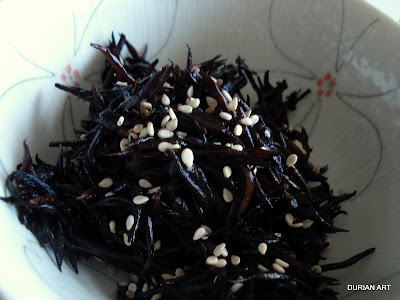 It’s a seaweed that you can buy fresh or dried.

Quantities : you will see and as you like.
Well, I mix about the same volume of veggies and okara and I count about 1/10th volume of flour per volume of okara. Then add enough liquid to get a paste you can form as patties.

Recipe :
-in a bowl, put water, the dry mushroom, the seaweeds (if they are dry). Let about 20 minutes. Keep the liquid, it will serve as a broth.
-grate the carrot, the onion. Cut the konnyaku in small cubes. Also cut the rehydrated mushroom.
-in a frying pan with a little oil, stir-fry the onion. Add in the other veggies. After 2 or 3 minutes add the okara and the broth. Add little mirin, soy sauce, salt to season lightly. Stir well. You get something quite dry. Take away from the stove.
-mix 1/4 flour and 3/4 water in a bowl, add to the previous mix.

-form patties in wet hands, sprinkle flour over them as you put them in a frying pan with hot oil. Cook both sides a few minutes.

To serve :
-brush the patties with Ikari Sauce (a cousin of the Worcester sauce), garnish with daikon radish (grated in paste) and sprouts of daikon radish.

And why not, a few leaves of crunchy ice plant ?