Transforming a bowl of freshly boiled chick peas into 3 dishes.

Falafels. It’s better to make them from raw chick peas, but I’ve mashed boiled ones with a little potato starch for binding, added randomly spices, mint, lemon balm, and the brown thing is the ground of sobacha.

Chickpeas in a tomato tabouleh with… what was in the fridge, sweet corn, ninniku no me (garlic stalks), bell pepper, green soy beans, mint too. And harissa.

Chick peas with lemon juice and lots of tahini (sesame paste) to make a creamy hummus. It’s a sauce for the falafels.

Chunky texture falafels, with a creamy tahini sauce. The local twist is the addition of nira (garlic chives).

Citrus flavored tabouleh. What is special is I’ve used yuzu, the Japanese citrus and different herb. That was really delicious.

Home-made tahini in the blender. I’ve added salt and lemon juice to make it a creamy dip. Harissa on the side.

I slightly precooked the bulgur in water (when I have more time, I soak it one night in plenty of water instead), then added everything to the drained grain. I let flavor mix overnight.

A side of cucumber kimchi.

First, a new version of cauliflower as a taboulé. 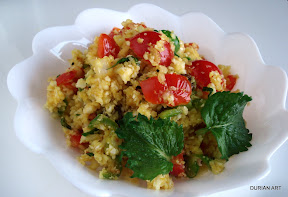 Then, a few hours in the fridge to let flavor mix and the cauliflower get cooked by the dressing.

Chicken marinated in olive oil with basil and Italian parsley…

…then grilled on the plancha.

Mini-mezze. OK, 2 items only… Well that should be 3. I have to confess what happened to the third.

Ah la la… In the name of culinary science, I tried to cook falafels in the waffle maker. Verdict : FAIL !
Oh they did cook, but they were glued there and split in 2. I had to eat directly from the molds.

Back to tabouleh. This is the Lebanese style. Far away from its remote French cousin.

Made with bulgur and all the herbs I had to use or lose. I though I had lots of herbs but I could have used 3 times more.

It’s crunchy and solid under the teeth, delicately fresh and fragrant. 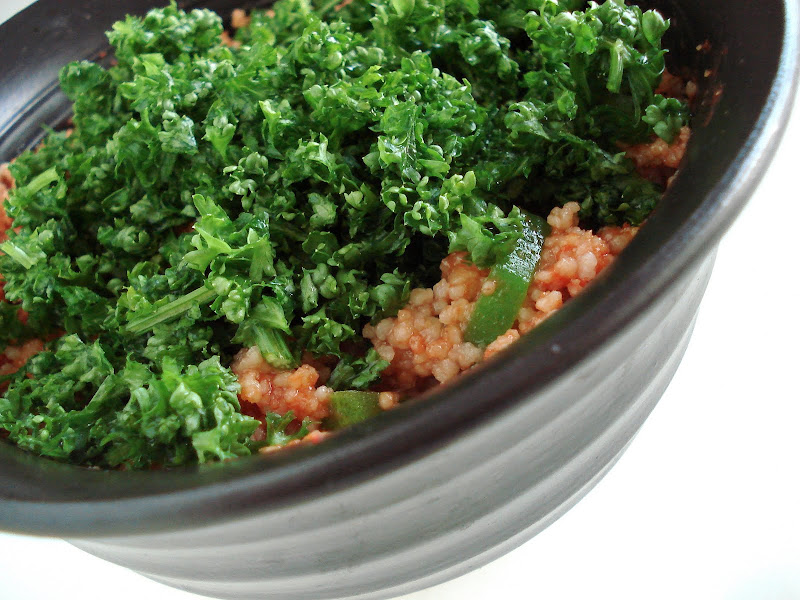 Taboule rouge (red taboule). The pun is lost in translation.

The couscous is soaked in a lot of thick tomato juice, with a little olive oil, okra, hot chili, salt. Before serving, I added capers, parsley and a little argan oil. 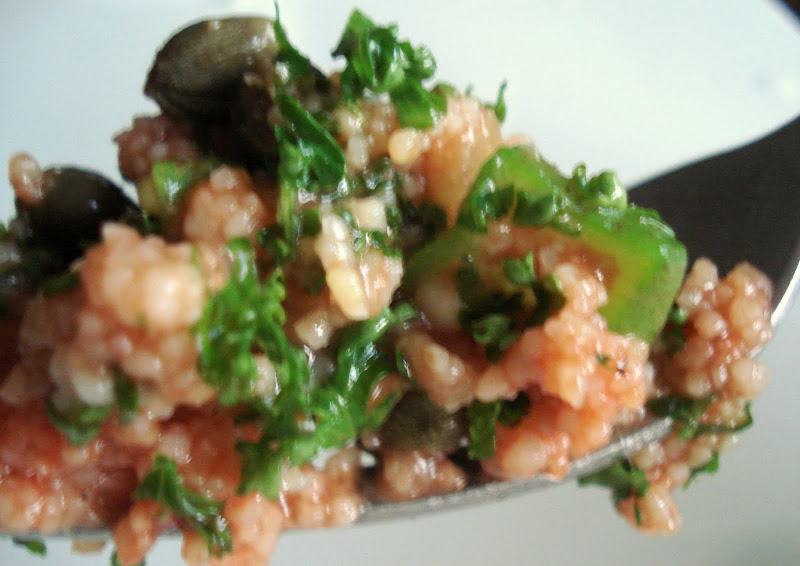