Dark day. Storms are waiting to burst. Let’s have a little fun and something sweet.
It’s magical, everything is made from dry pantry items.

And with that I’ve strawberry customized my tapioca.
Boil tapioca as needed, rinse, put in a bowl with 1/2 cup water, strawberry essence, sugar to taste, the red coloring. Cover. Let overnight in the fridge.

It’s pink and it tastes of strawberry… candies. Not very natural.

Put bubbles in a bowl.

Pour soy milk, slightly sweetened and vanilla flavored. Not outside, if you can avoid…

Isn’t that cute ? That’s really good. Maybe don’t mix in advance as the tapioca could give back its coloring into the milk.

Even if “féroce” is fierce and the French for lawyer is “avocat”, I don’t think the dish was named from there. It’s most likely an allusion to the fierce hotness of the chili.
It’s a specialty from the French Antilles islands (Caribbeans).

There are variations of the recipe. The principle is to make a puree of avocado, morue (salted cod fish), hot chili pepper and manioc. Not necessarily in equal proportion, as some people want less chili, some more even I have not met anyone like that so far.

I soaked the salted fish in several baths, then grilled it in the oven-toaster and torn it apart, taking away the bits of bones.

Avocado (and a little shikwasa lime juice), a chili, a chive (kujo negi).
If you don’t get the manioc from your garden, Antillese grocery stores have some powdered ready to use manioc, perfect for this recipe. If you don’t have such stores…
So I have used Asian tapioca starch that I baked in the oven toaster to cook it, then wet with coconut milk, let it sit a while before mixing in.

The mixture is usually smoother. It can be made dryer with more manioc and shaped in balls to take with a toothpick. That depends if you want it as an appetizer or a dish. That was a meal, so I wanted it chunky and kept bits of fish and avocado to add in later.

The chili can be proposed as a topping if you are not sure about how much fierceness the guests can enjoy.
Serve with a ti’punch. Well, sweet white wine was well today.

To complete the feast, something neither fat nor salty… Small sweet potatoes. 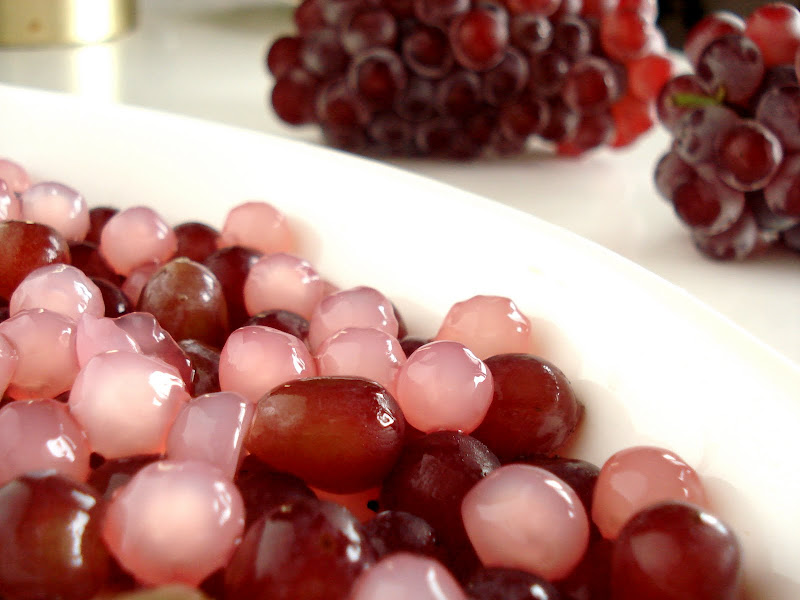 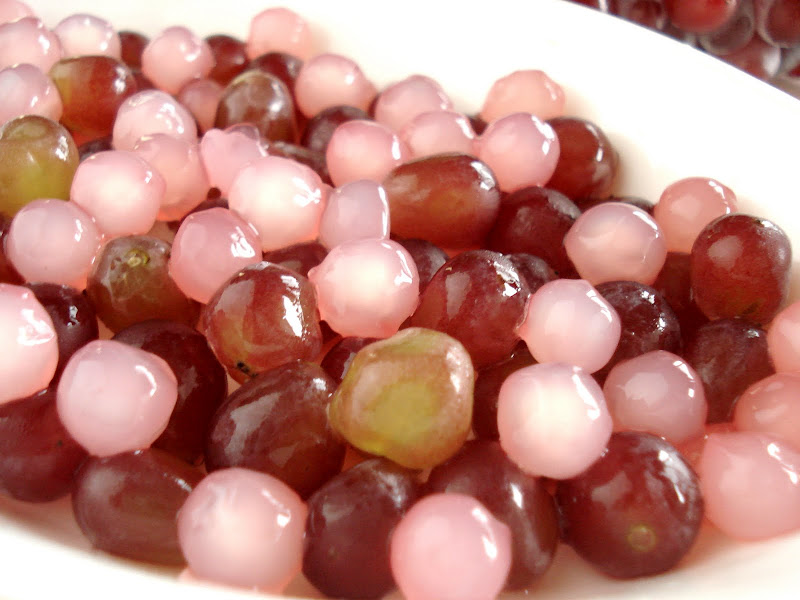 Fruity dessert. Table grapes tend to be very sweet. I don’t really appreciate them because it’s too much for me. Unless I mix them with something neutral. to dilute sweetness. 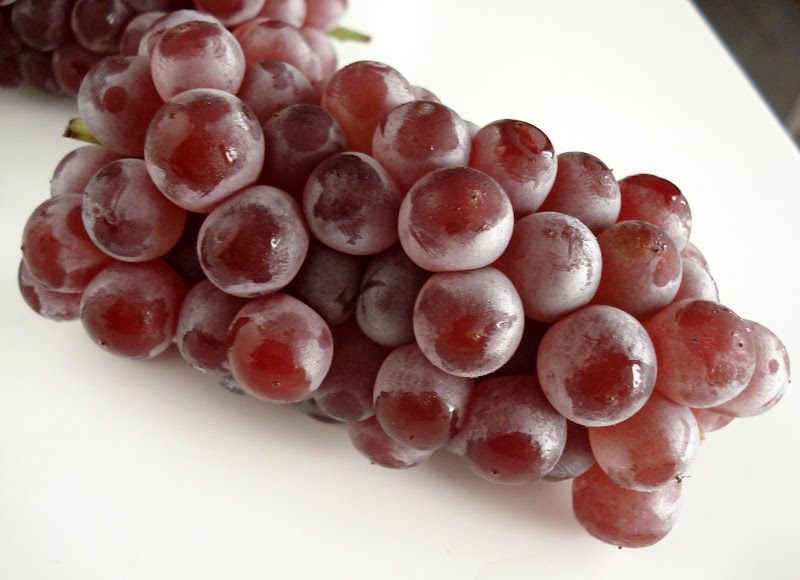 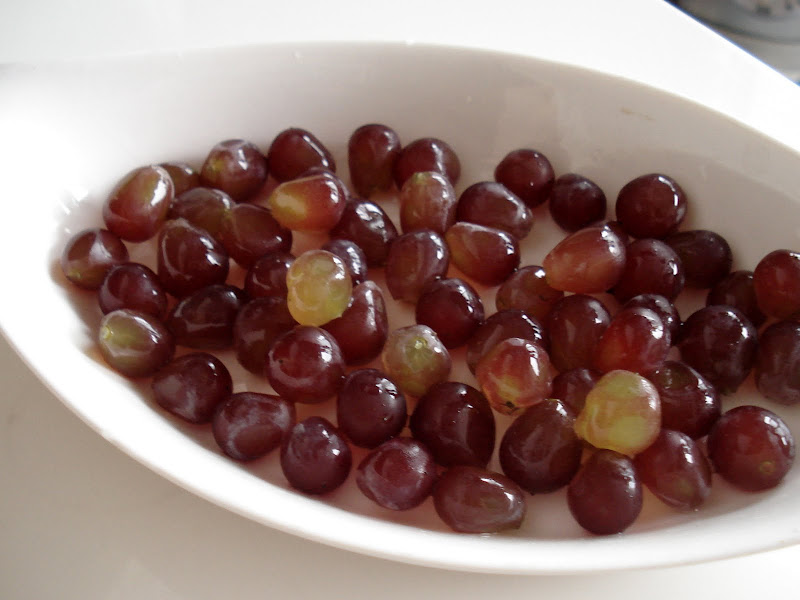 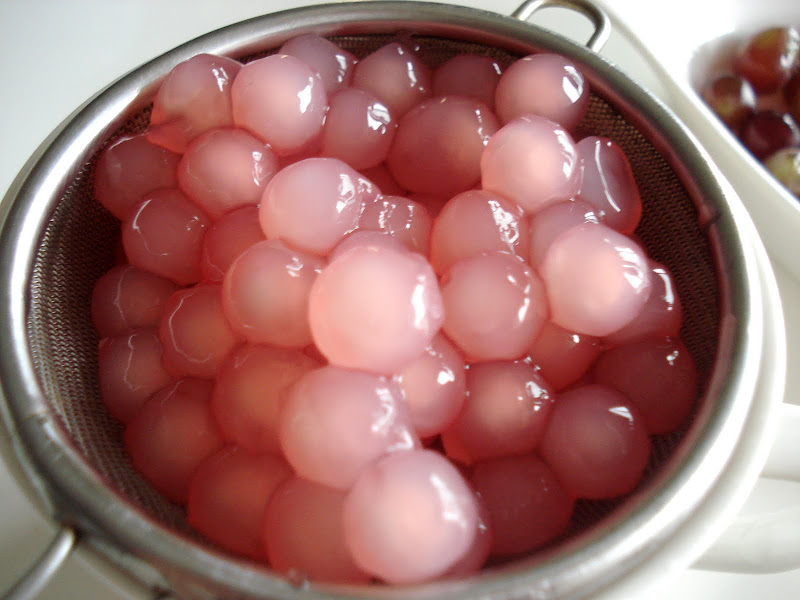 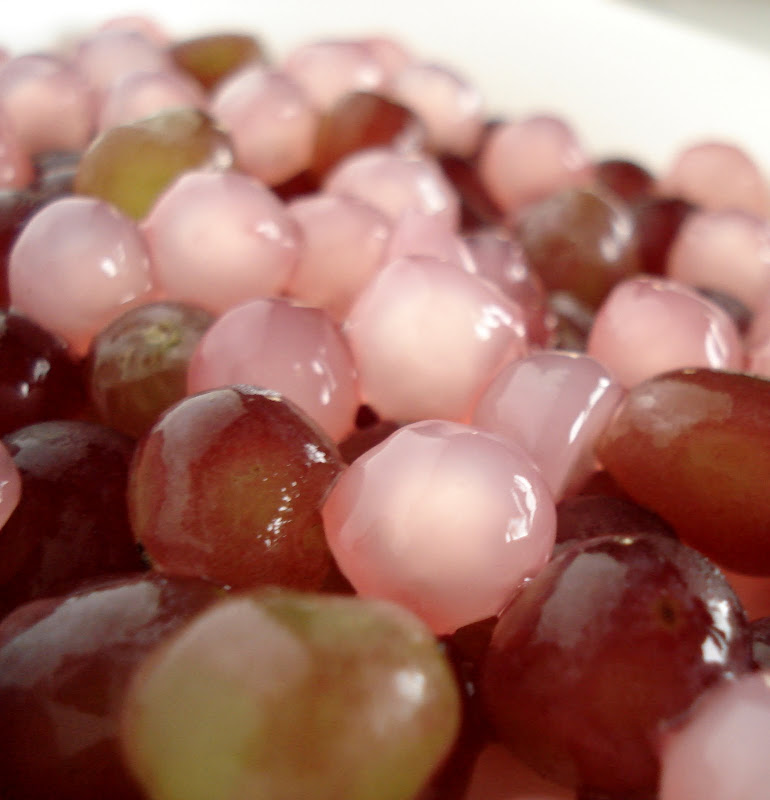 Mix and enjoy ! Fun to eat and delicious. 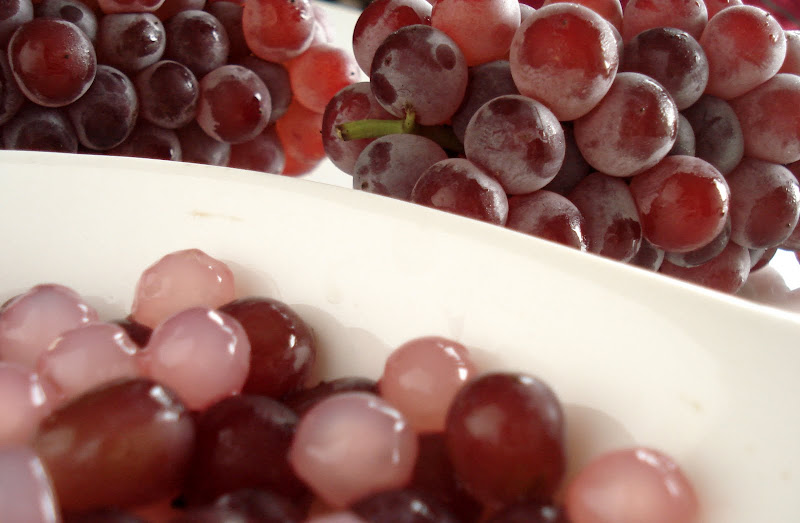 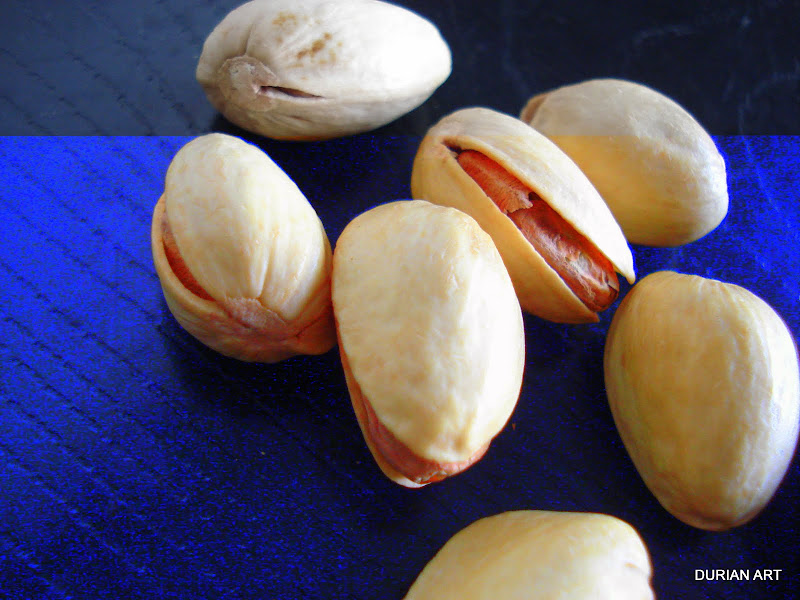 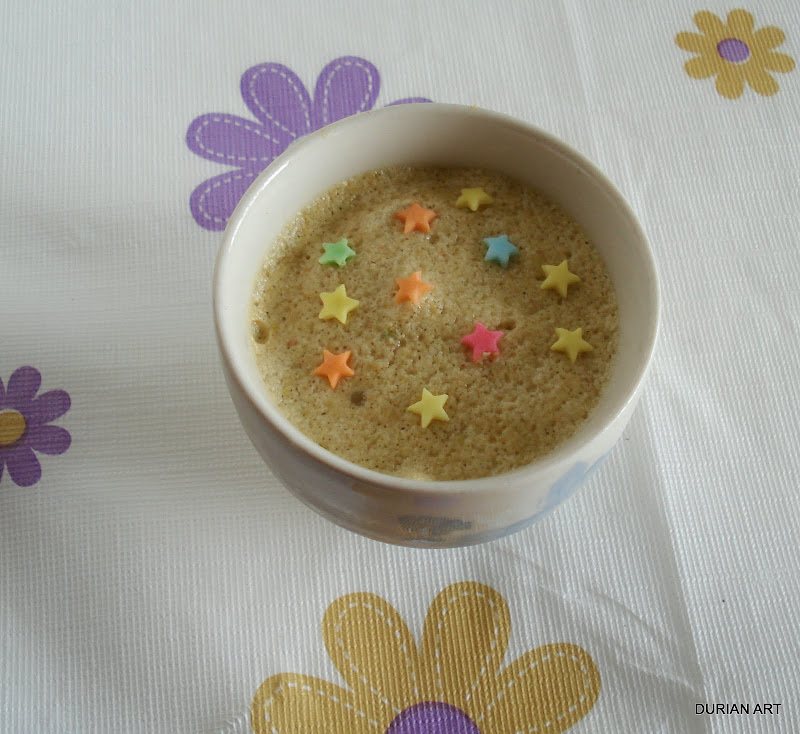 A funky crème persane… Original gourmande flavor with home-made pistacchio paste. I really wanted the color to be like the flower.
OK, that’s a lie. They sell the green pistacchio paste more expensive than the caviar (no joke this time), and not on a direct train line from here. The taste is different. It’s more like a pistacchio praliné. 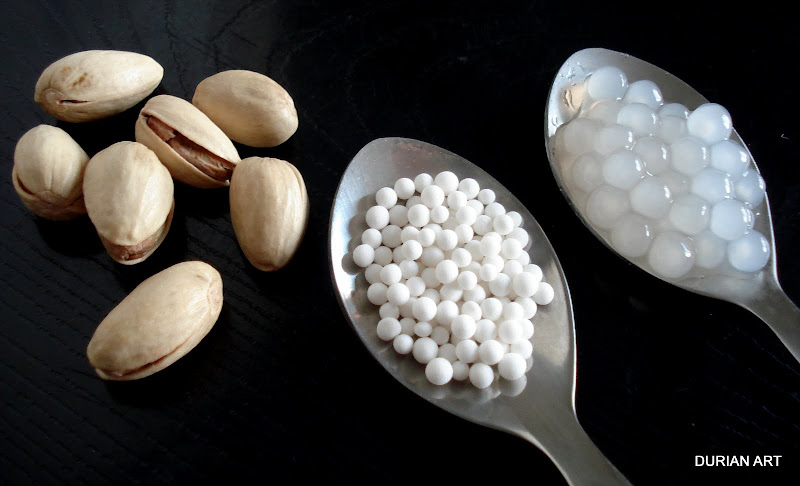 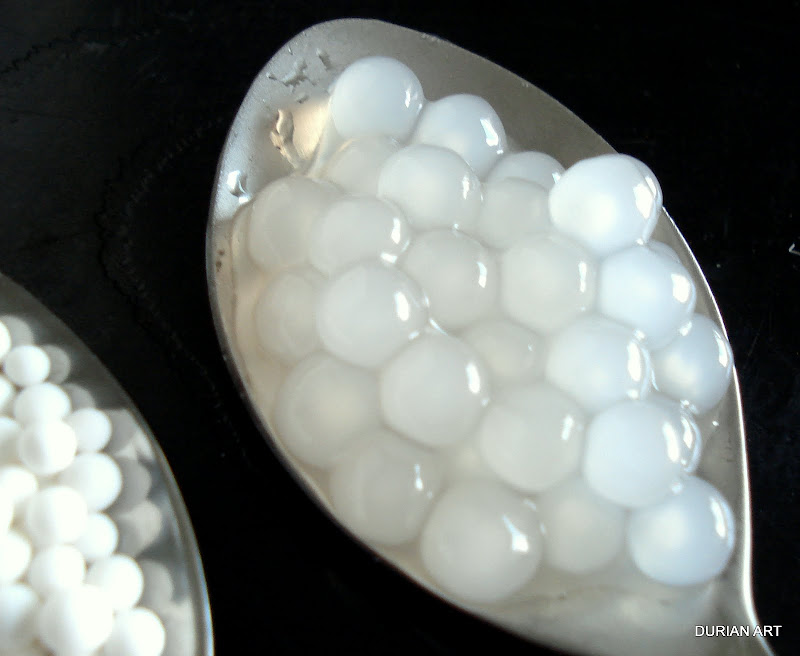 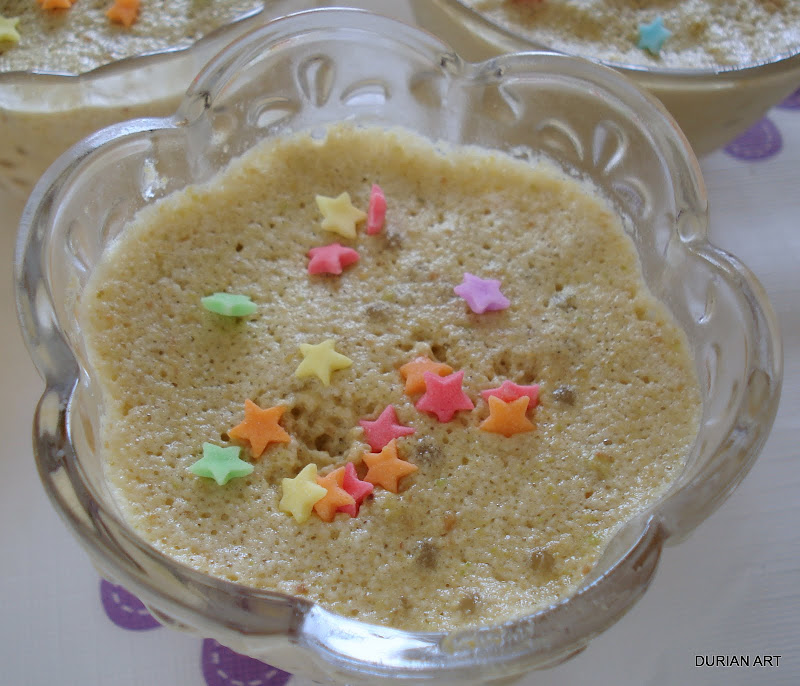 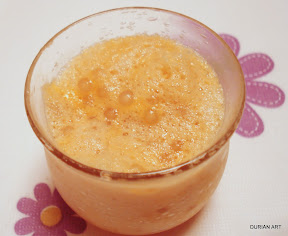 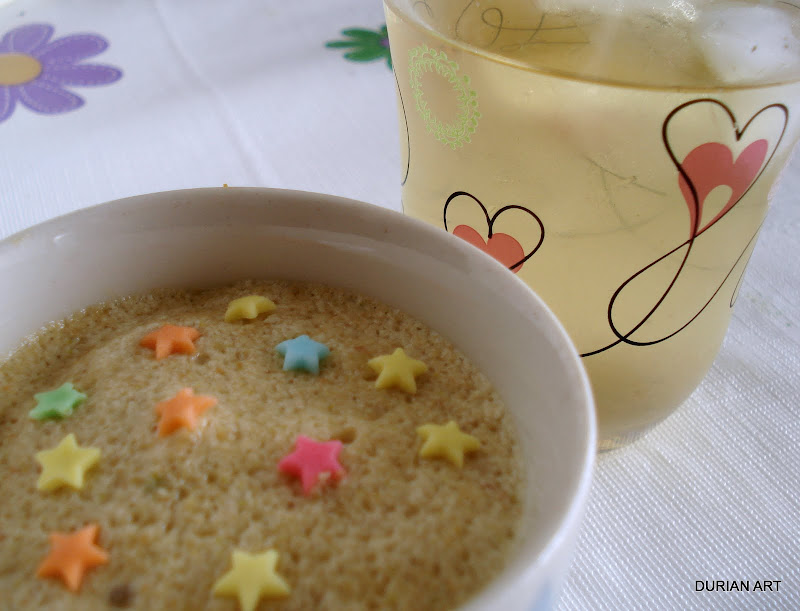 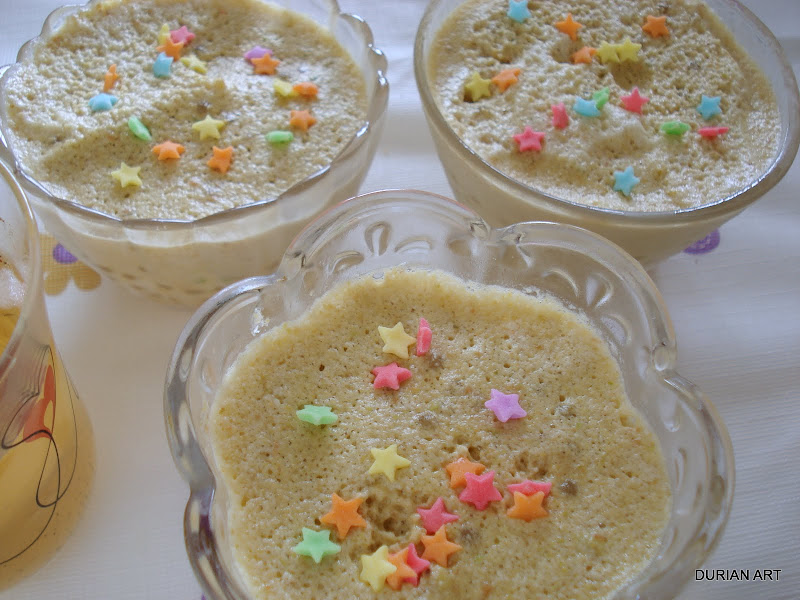 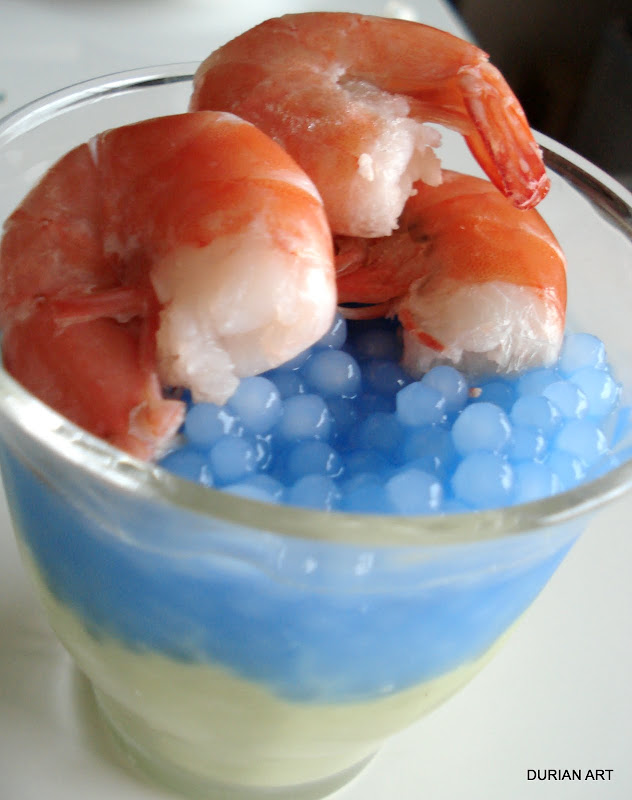 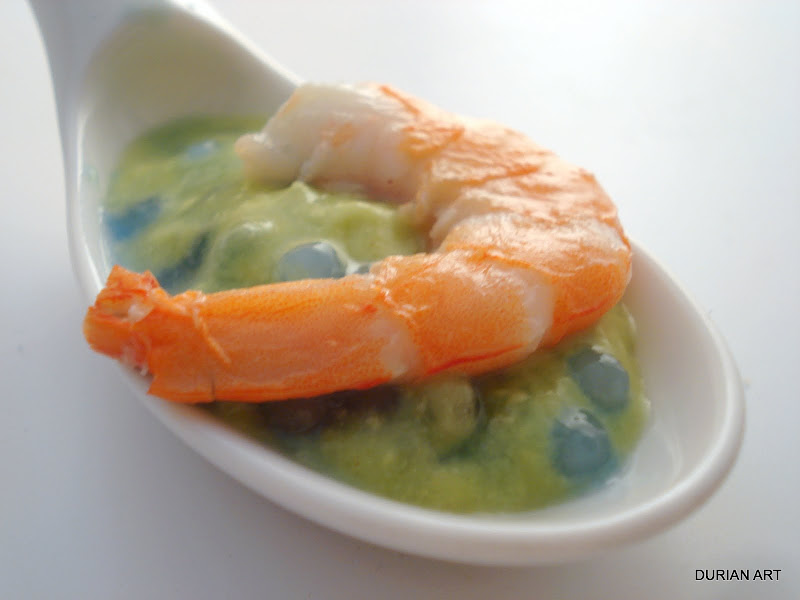 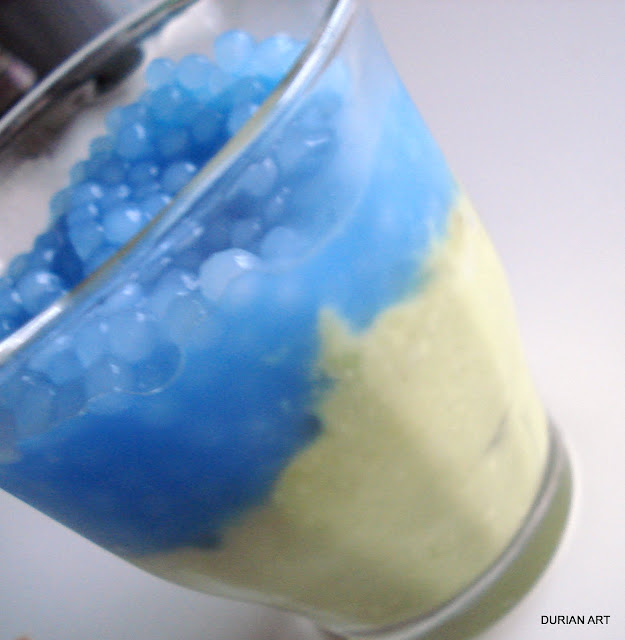 To make the cream : half-frozen avocado, ice-cubes, vinegar, onion, salt and a few drops of Louisiana hot chili sauce… in the blender.

The spirulina tapioca was not meant to frighten my readers. Or maybe it was, after all.

Colette, the famous writer said that : “If you are not able to do a little witchcraft, you have no business at cooking…” 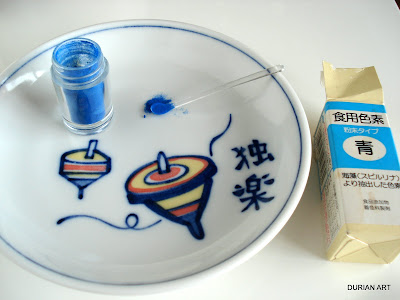 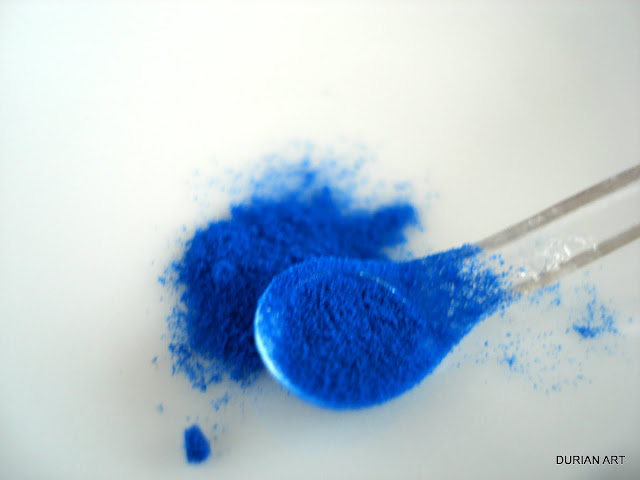 I added to cooked tapioca (after it cooled a little) and let it overnight in the fridge. Any blue food coloring would work, I think. 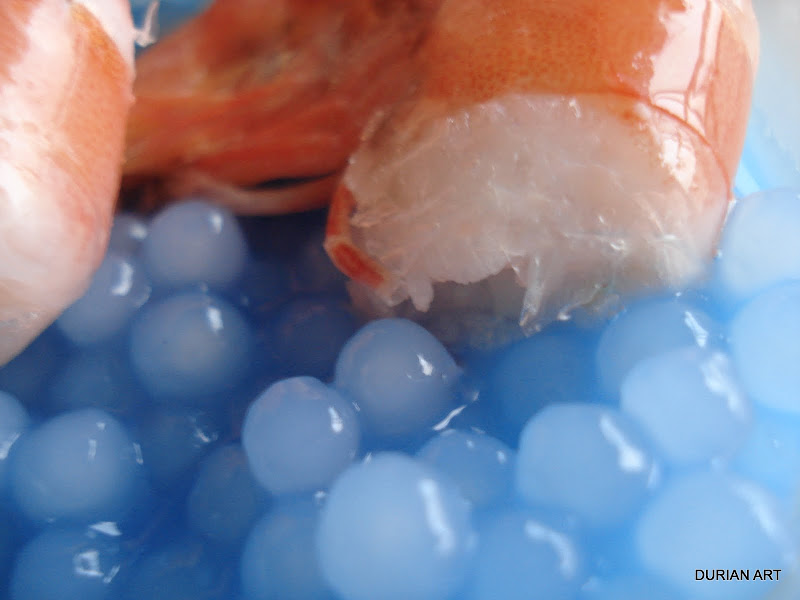 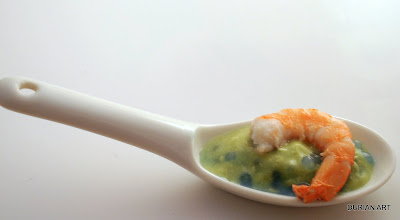 Eat the 3 together : that’s as paradisiac as the colors ! 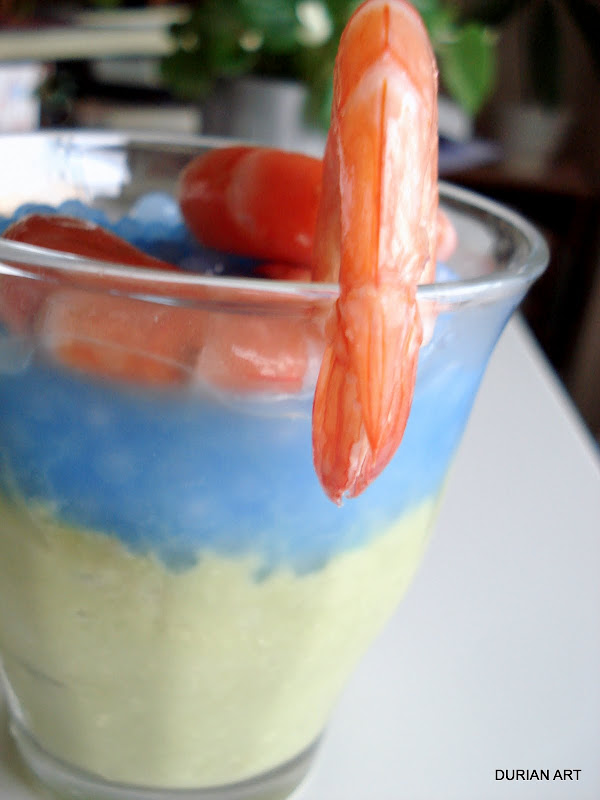 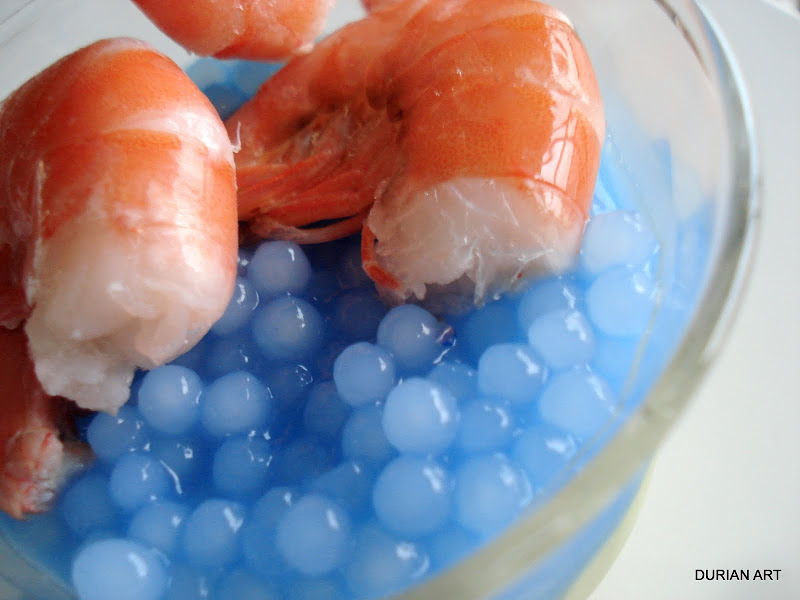